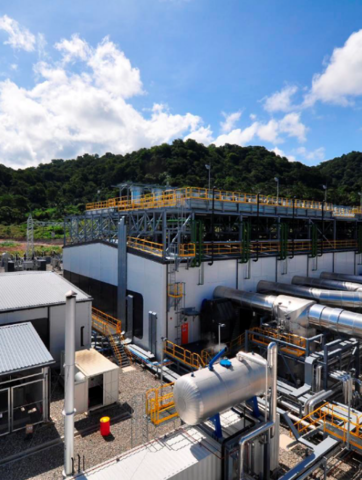 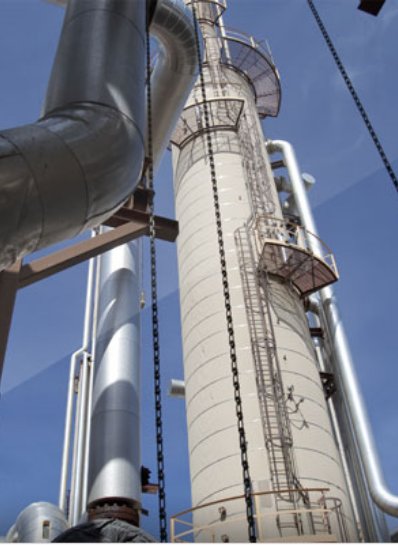 To become the leading energy investment holding company in the region with a strong business identity, with distinctive high performing assets, an environmentally friendly conscience, with high quality, competent personnel, in order to maximize stakeholder’s returns and capital value. 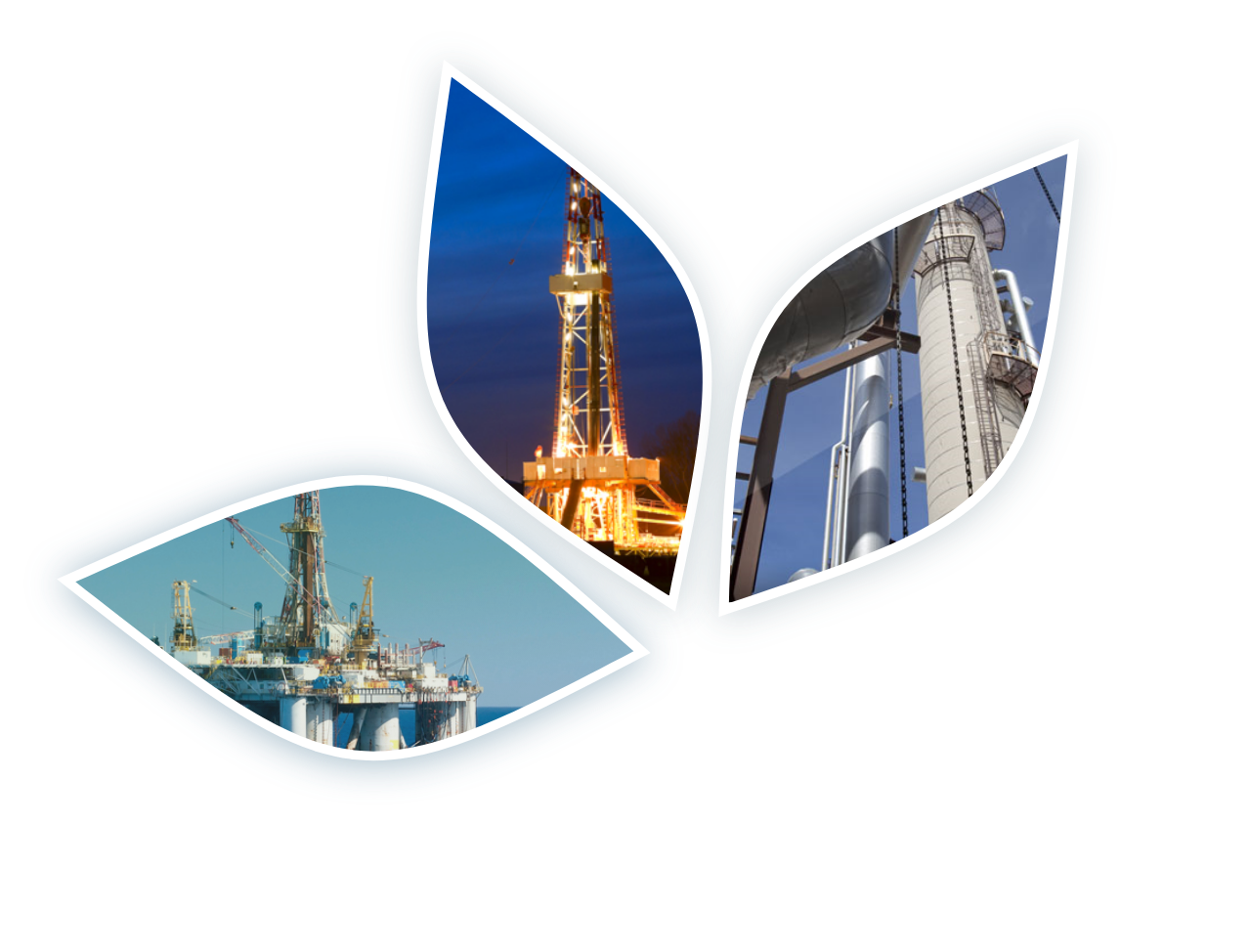 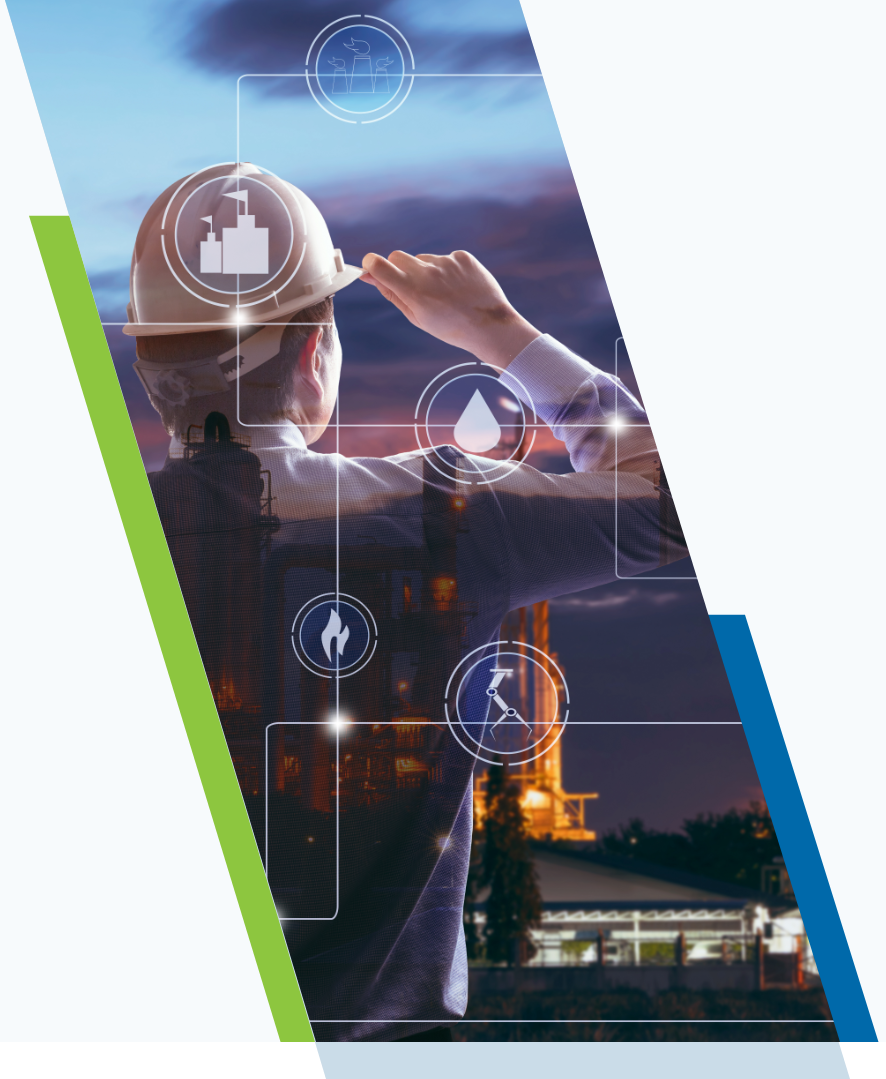 We adhere to a clear set of values that will drive our operating principles and business ambitions, which are fundamental to the way we work. 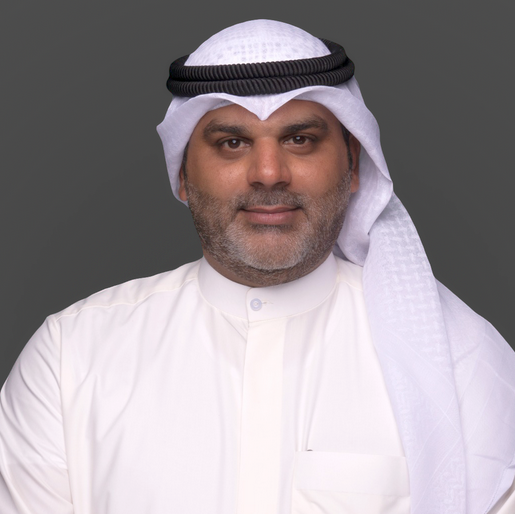 Mr. Abdulrazzaq Al-Roomi has more than 12 years of experience in banking, in particular contracts, liabilities and Islamic banking. holds many certificates in various fields of law, in particular corporate law, governance, capital markets authority law and tax compliance law, in addition to many professional certificates in the field of arbitration, management, training, regulatory compliance, auditing and risks.

currently holding the position of Senior Legal Adviser and Executive Director in the Legal Group at Kuwait Finance House since 2009.

Member of the Legal Advisors Committee in the Kuwait Banking Association.

Member of the Legal Advisors Committee at the Institute of Banking Studies.

Member of the Office of the study due diligence process’s acquisition of Kuwait Finance House, Ahli United Bank.

Member of Integration Office of the acquisition of the Kuwait Finance House, Ahli United Bank.

Mr. Al-Roomi holds a Bachelor of Laws with a grade of “Very Good” from Kuwait University. 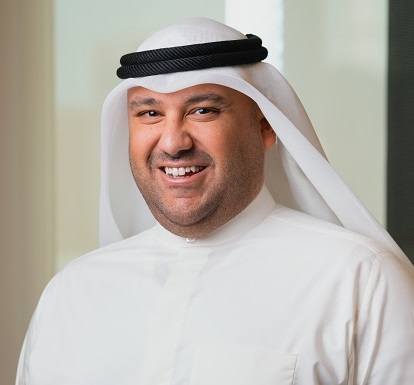 Mr. Ahmed Al-Nafisi has more than 15 years of experience in financial services, and he specializes in the field of investment and private equity.

Al-Nafisi has held several positions in investment companies and leading banks in Kuwait. Al-Nafisi has long-standing experience in sourcing, structuring and evaluating investment opportunities. He represented many of the leading investment firms across the GCC in his capacity as Board Member. 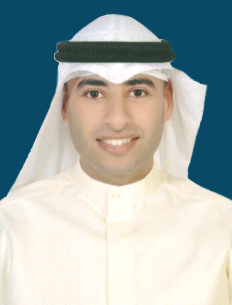 Mr. Nasser Alshaya is a finance professional with over 14 years of corporate and structured finance experience with a focus on developing, structuring, and funding structured financing transactions including bilateral loans, project financing and syndication space.

Mr. Alshaya holds a bachelor’s degree in finance and Accounting as well as a Master of Arts in International Administration, both from The University of Miami.

Mr. Al-Kulaib has over 25 years of professional experience in the finance and economic sector, and business administrative Sciences.

Mr. Al-Kulaib held a various position over the years in both private sector and academic sector in Kuwait University.

Member since 2005 and until present as faculty of department of finance and financial institutions in College of Business Administrative – Kuwait University. 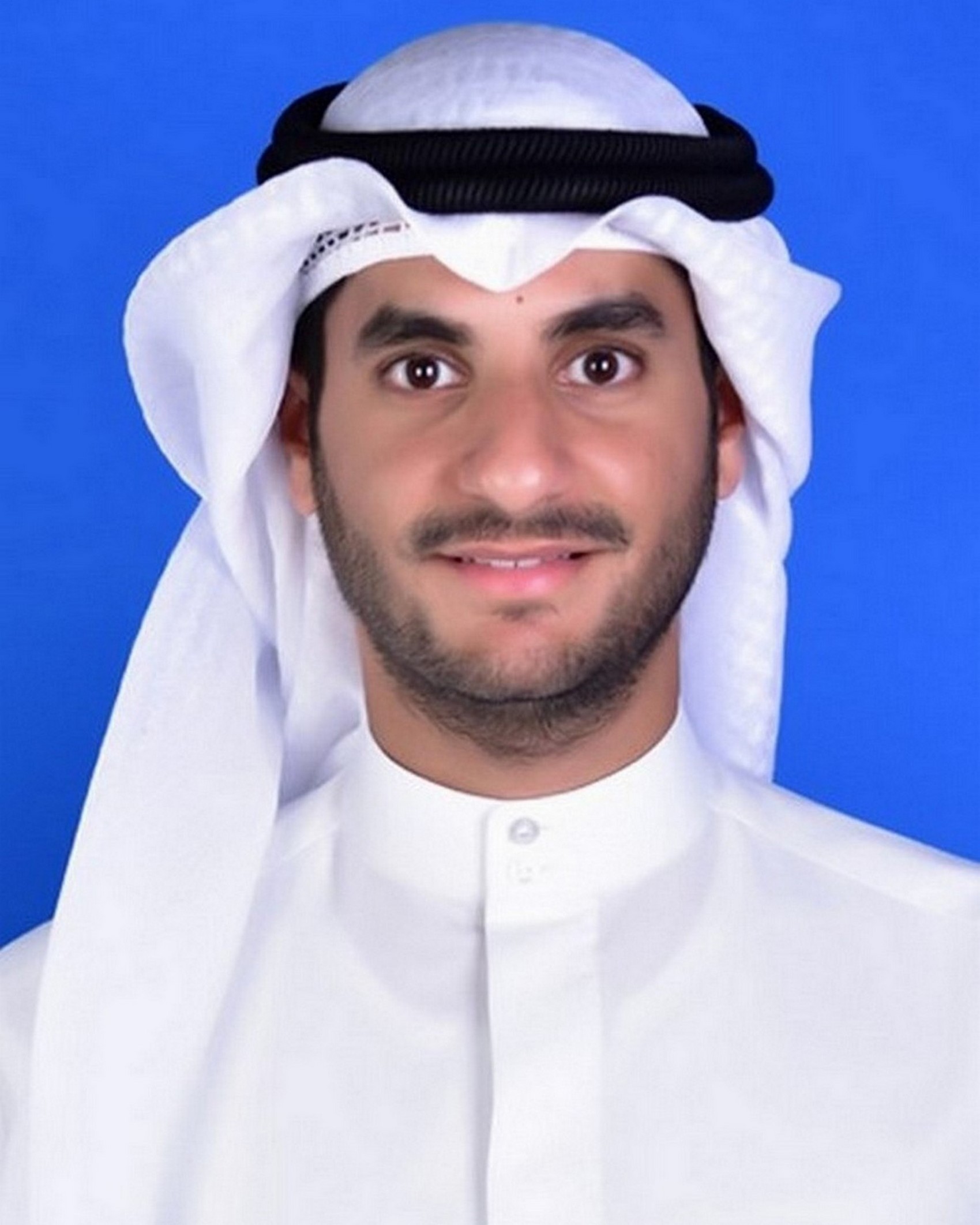 Mr. AlBader holds a Bachelor of Business Administration – Finance from the University of San Diego,USA

Mr. AlQahtani has over 21 years of professional experience in the oil and gas sector, investments, restructuring, planning, and business development.

After that, he held a position of CEO at Invita Kuwait for Information Technology (subsidiary of NTEC owned by KIA).

Mr. Al-Qahtani is currently Board member in several companies.

Hamad Alturkait started his career in Kuwait Petroleum Corporation working in the Corporate Planning and then the Corporate Treasury and Investment Departments. Subsequently, he joined Alsafwa Group holding Company as Head of the Financial Services Division.
Mr. Alturkait holds a B.S. in Mechanical Engineering from Boston University, USA and was awarded the CFA charter in 2007 and CTA (Certified Technical Analyst) charter in 2008. 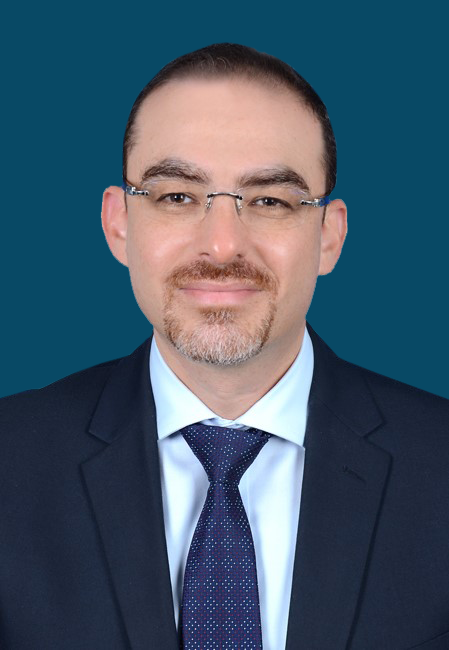 Mr. Tareq Al Haddad has over 22 years of professional experience in in the fields of Finance, Accounting, Auditing, Financial advisory and risk management.

He joined The Energy House Holding company in 2021 as the Group Chief Financial Officer, prior to that he held a position of CFO at KFH Subsidiary – Al Enmaa Real Estate Company after that he joined as a CFO, Financial Advisor in reputed firms in Kuwait.

He holds a bachelor’s degree from Faculty of commerce – Mansoura University. He is a Certified Investments & Derivatives Auditor ( CIDA ) – USA and he holds the Certification in Risk Management Assurance ( CRMA ) – USA.

HPSIC is a Sudanese company working in EPC, civil/infrastructure and the oil & gas industries in Sudan, South Sudan and Iraq. They are also qualified and capable of oil drilling and oil & gas plant construction. HPSIC has the advantage of a large scale operation and asset base, combined with long operational experience in North Africa, which earned them a leading position as a preferred contractor for government projects.

Established: 1998
Energy House Shareholding: 25%
Including exclusive marketing rights for the Arabian Gulf, MENA, FSU and Indian Sub-continent regions
U.S. based Synfuels is the developer of a revolutionary patented Gas-To-Liquid (GTL) technology, based on the ECLAIRS process. The ECLAIRS process has significant advantages over the Fischer-Tropsch process and conventional technology in terms of capital and process costs, product throughput, yields and quality. Their competitive advantage is the economic benefits of this technology combined with ease of implementation makes it the perfect choice for oil and gas producers with stranded gas flaring to capture lost revenue while reducing carbon emissions. Additionally, their technology is ideal in utilizing low value gas (including ethane) and converting to higher value liquids.

Nordic is a snubbing & work-over, coiled tubing and well intervention company, based and operating in the United Arab Emirates.
Since inception, Nordic has strategically grown from a small well services company to a company with a fleet of sophisticated thru-tubing tools, coiled tubing units and advanced snubbing & work over units.
To better supply the customers with oilfield servicing solutions, the company also offer specialized fishing tools, thru-tubing cutting systems, and scale removal systems to its services. With its unique expertise, Nordic also provides support to drilling operations by supplying equipment and personnel on many well service operations within the oil and gas industry, that sets Nordic apart from any other company in the Middle East region.
The company is currently active in Turkmenistan, Oman and Saudi Arabia.

In 2012, Energy House invested in the Al-Taqa Fund L.P. (a Sharia compliant parallel fund) through AREF Energy International Limited (a 100% subsidiary of Energy House and an exempted company incorporated in the Cayman Islands with limited liability). Kerogen capital is an independent private equity fund adviser established in 2007. It manages the Kerogen Energy Fund L.P. (and the parallel Sharia compliant Al-Taqa Fund L.P.), collectively a USD 1 Billion Fund, which specializes in providing growth and development capital to small and medium- size companies in the oil and gas sector. Kerogen Capital is based in Hong Kong with a presence in London. Kerogen Capital focuses on investments in international emerging basins, particularly those with a nexus to Asian demand and investment flows. It also invests selectively in unconventional oil and gas projects. The Kerogen team is comprised of oil and gas industry experts with technical, operational and private equity management experiences, in addition to an extensive strategic network.

Saudi Makamin provides diverse services to the oil and gas sector in the Kingdom of Saudi Arabia and abroad including work-over and deep-water drilling, non-destructive testing services, fabrication of pipelines, site preparation, geophysical and geological studies. In addition to that, the company offers other services involving advanced-technologies throughout its investments and alliances with international partners including i-fields and SCADA services, manufacturing and supply of wireline tools (PNLs) and passive seismic.
Over the past few years, the company demonstrated great ability to undertake operational contracts with high success rates in its bidding activities with major oil and gas companies in the region, including Saudi Aramco. Makamin also took great steps in creating successful international alliances.
Makamin is progressing rapidly to increase its market share in the Kingdom of Saudi Arabia and implement more operational projects in the region through its distinctive business development and marketing teams who are closely monitoring the market to capture lucrative business opportunities in order to maintain and grow the company’s profits and overall financial performance.

OFIL provides mud logging services to corporate establishments that are engaged in oil well drilling, exploration and development, including deep water and coal bed methane (CBM).
The Company manufactures its own proprietary mud logging units (MLUs) and also provides rig instrumentation and services for accurate, reliable and globally accessible online - real time drilling data using pressure indicators, diaphragms, driller consoles, recorders, etc. The Company also provides real time gas evaluation systems consisting of FID/TCD gas chromatograph (GC) with sensitivity in PPM. The Company currently operates in India and other parts of the MENA region.
OFIL is the market leader in Mud Logging in India with a 45% market share. The Company has an installed capacity of 40 MLUs and has monitored more than 2,500 wells in offshore and onshore locations.
The company has an in-house software development team for development and upgrading its mud logging software. Further, it has a pool of more than 300 well qualified and trained professionals, including data engineers, mud loggers, service engineers, computer experts, software professionals and engineers. 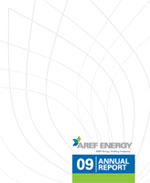 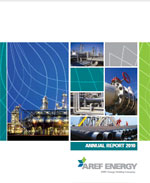 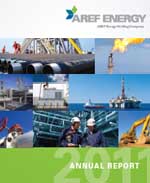 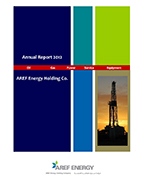 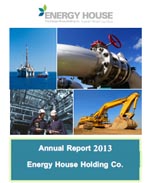 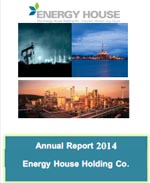 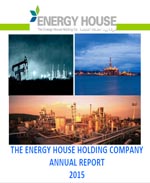 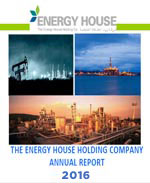 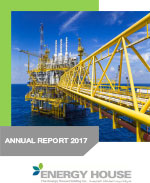 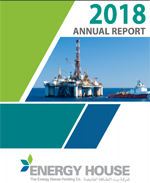 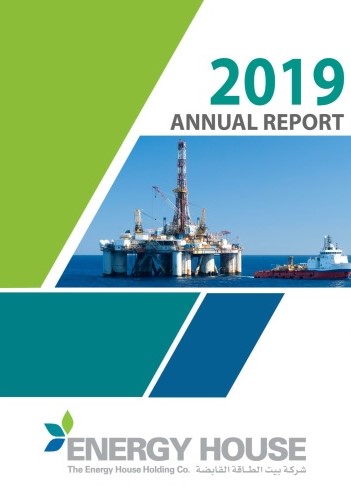 Corporate Governance
Energy House Holding Company is committed to generating standards of governance to ensure the achievement of company strategic objectives and keep the shareholders and stakeholders rights in line with the fifteenth book of the executive regulations of the Capital Markets Authority in the State of Kuwait.

The key objectives of corporate governance and oversight is achieving transparency and credibility, the ability handle crises and enhance administrative efficiency and to enhance management efficiency, thereby achieving protection for the shareholders.

In addition, these regulations emphasize the importance of adhering to the provisions of the law, ensure the financial performance review and the existence of administrative structures, reinforce control and audit procedures, raise the level of responsibilities, promote fairness and transparency and eliminate conflicts of interest.

Board of Directors and Committees:
The role of the Board is reflected in the representation of the company’s shareholders and take responsibility of the company’s management through the application of an effective governance system, and have a board of directors supervisory role through his leadership and control company business, as for the company daily operations, it is handled and managed by the executive management.

The general framework of the principles of corporate governance in the company is based on the independence of the Board of Directors and the segregation of the role of the supervisory board and the executive management. Therefore, the company has formed a number of committees that work on the follow-up the activation of corporate governance regulations and enhance the level of transparency and integrity in their operations, including:

The Audit Committee
The Audit Committee is primarily responsible for assisting the Board in performing its responsibilities regarding the integrity of the financial statements, the performance of the external auditors, and monitoring the internal audit function, business practices and ethical standards of the Company in a manner consistent with the applicable regulatory requirements.

The Risk Committee
The Risk Committee is working to assist the Board in the performance of its responsibilities in the supervision of the existing and future risk situations as well as its role in determining the risk tendency of the company and to identify methods and mechanisms to mitigate risks along with the regulatory requirements applicable in this regard.

The Nomination and Remuneration Committee
The primary role of the Nomination and Remuneration Committee is the selection and giving recommendation to the Board of Directors about nomination for new membership of the Board and its committees and executive management with candidates are able to strengthen the Board and executive management ability to manage and guide the company’s businesses effectively. Besides its role in the development of a clear policy for granting of bonuses and compensation that would establish the principle of belonging to the company and motivate employees to work to achieve the company’s goals.

Code of Ethics
The company seeks to apply the highest standards in the values of professional ethics conduct which are based on a number of bases and major props, also the company expects from their employees and all its representative to act in accordance with the highest personal integrity and professional standards in all activities and comply with the laws and regulations as well as the company’s policies.

Those bases has been developed through a system of policies and procedures, which include:

The complaints and whistleblowing Unit
In case of any complaint, kindly hand over all related supporting documents followed either of the following ways: